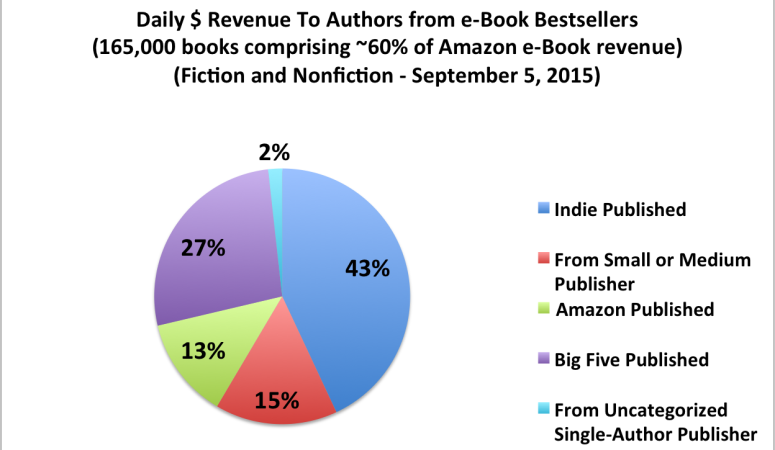 The majority of readers are abandoning traditionally-published books and buying non-traditionally-published ones instead. Over the past 18 months there has been a huge shift in book sales. The 1200 publishers that make up the Association of American Publishers saw a decline of 7.5% in Kindle book sales when comparing the first quarter of 2014 to the first quarter of 2015 Kindle ebook sales.

According to AuthorEarnings.com, in February 2014 traditionally published authors were taking home nearly 60% of e-book royalties on Amazon. Today they are barely earning 40% of all Kindle e-book royalties; while Indies are taking home nearly 60% of Amazon royalties. That is a huge shift when you are talking about sales in the millions of dollars. Within 18 months the trend has completely flipped.

Despite there being a downward shift in traditionally published e-book sales, there is an upward shift in e-book sales. According to a Wall Street Journal article, “Amazon says e-book sales in its Kindle store—which encompasses a host of titles that aren’t published by the five major houses—are up in 2015 in both units and revenue.”

AuthorEarnings.com wrote, “The most recent fall in traditional-publishing’s share of the US e-book market may very well be due to Penguin Random House’s return to agency pricing in early September. Penguin Random House, the largest of the Big Five publishers, accounts for roughly a third of the AAP’s total reported revenue. And almost overnight, the average sales price of a PRH Kindle e-book jumped from $9.06 to $10.79, with easily predictable results: both PRH’s unit sales and their overall e-book revenue are down, just like the rest of the Big Five.”

Why look just at Amazon sales? Because Amazon makes up 65% of online print and digital book sales. And the statistics available regarding Amazon book sales mirrors other online book sellers.

Read the September 2015 Author Earnings Report for more thorough details. Learn how to self-publish by reading How to Self-Publish: A Guide for Author-Preneurs. Or check out Selah-Press.com author services.

Do you have a book you want to write and publish? What is stopping you?